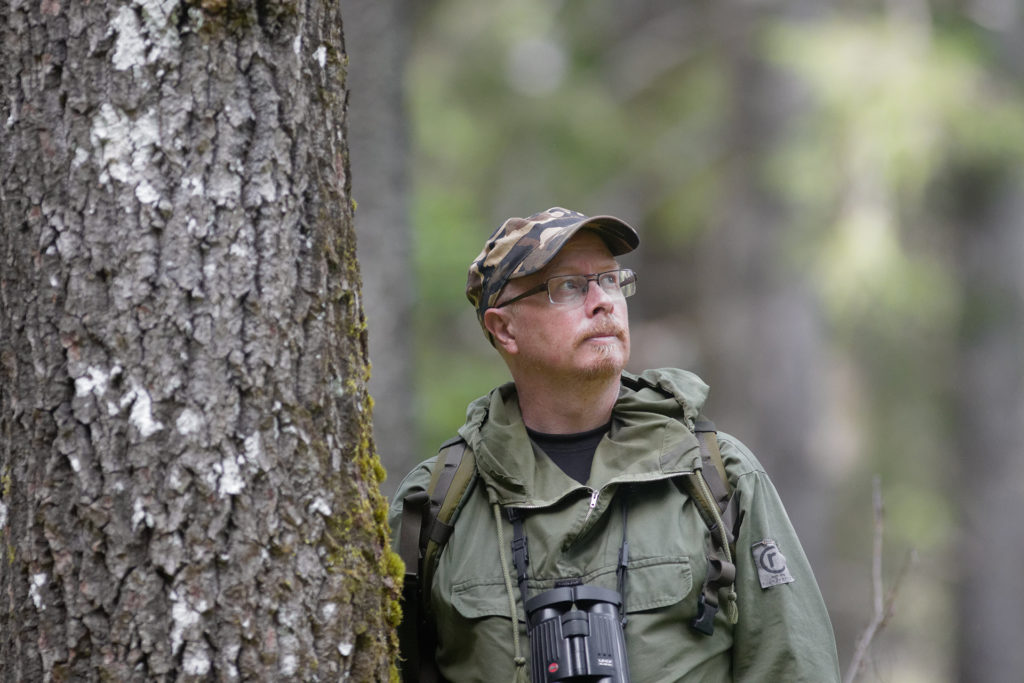 Hi everyone! My turn for the presentation. Originally from Belgium, my name is Philippe Fayt and I am a postdoc researcher in environmental sciences from the University of Eastern Finland. In parallel to the completion of my doctoral studies on the population ecology of the rare Three-toed Woodpecker years ago, I have developed a strong focus on forest ecology (particularly interested in the ecological values of ancient forests), wildlife monitoring (birds and flying squirrel especially) and biodiversity conservation at the northern latitudes. This implies that I have been already using many pairs of rubber boots investigating those wildest places we have in eastern Finland and western Russia up to the Arctic. Examples of my past or ongoing employment relationships include responsibilities at the Centre for Economic Development, Transport and the Environment of Kainuu (Kainuun ELY-keskus), the Finnish Forest Research Institute (Luke), the Finnish Game and Fisheries Research Institute (Luke), the Finnish Museum of Natural History (Luomus), the Finnish Forest and Park Service (Metsähallitus), the Finnish Environment Institute (Syke) and Snowchange.

Since last February, and this is what brings me to you, I have also started to work as project planner for the North Karelian ELY-keskus (the regional arm of the Finnish Ministry of the Environment), where, together with Vilma Lehtovaara (the coordinator of the North Karelian Biosphere Reserve), I have been in charge of the development and implementations of activities that support the visibility of the Biokarelia CBC project. In collaboration with our different project partners (Luke, Arbonaut Oy, the Karelian Research Centre), the main objective of the project was originally to foster and strengthen cross border scientific cooperation between Finland and Russia on issues seen as critical in a global context of climate change, increasing forest fire risk and biodiversity loss. These include the connectivity assessment of high conservation value habitats, better knowledge sharing on biodiversity, and the development of forest fire forecasting tools and techniques, such as recently discussed in a series of YouTube webinars (https://www.youtube.com/playlist?list=PL8R6wL1HrKT4F3bkJggu3MHVpVzbQ88Oq).

Well, that was until the war in Ukraine broke out. Now that the collaborative part with Russia has come to an end, the Biokarelia project was forced to shift its focus towards the Finnish territory only, which slightly modified my original tasks. Although still concentrating on similar issues as before, I have been interested in the writing and planning of a short movie project on the modern and future challenges of fire management in Finnish forests. Although forest fires have always been a part of the natural cycle of the boreal forest allowing a rich and specialised biodiversity to develop, predicted changes in their occurrences, severity and extent, as the climate is warming up, will likely have consequences on the way their ecological benefits will be perceived and accepted by the society and how new tools and techniques will play a role in mitigating those risks. Still in the making, this movie project has benefited from many inspiring and expert North Karelian collaborations for the recording and editing (Korpipaja, Marko Haapalehto/Metsähallitus), interviewing (Kaisa Junninen/Metsähallitus, Evgeny Lopatin/Luke, Tuomo Puumalainen/Arbonaut, Mika Viertola/ Pohjois-Karjalan Pelastuslaitos) and voice-over (Adam Lerch). When (soon) ready, it will offer a good visibility to the Biokarelia project and its practical implications.

Another task that has taken much of my time over the recent months has been (and still is) the planning and building up of an internet platform that will help researchers and students working on biodiversity in Finland to better know each other and boost their own collaboration research network. It will also help them to find study and funding opportunities specifically dealing with biodiversity more easily, get acquainted with upcoming events on the topic, and become inspired by successful conservation and restoration stories. Depending on how successful the new platform will eventually turn out to be (let us see what the future will bring), the network could then be potentially expanded towards the other Nordic countries, if the funding allows it. Nature knows no border and its conservation, as well as its overall understanding can only benefit from international cooperation.

Finally, and as a nature photographer in my free time, I would like to conclude by sharing with you my own thoughts, regarding wild natural places such as found within the North Karelian Biosphere Reserve. Based on my own experience, heading to remote and pristine places, genuine biodiversity hotspots in modern forest landscapes, is certainly a rare and privileged moment in life but I would like to add that it also demands from potential visitors a special personal attitude and a certain level of ecological awareness. For example, curiosity (to be able to perceive and be astonished by the natural wonders around you), humility (to accept that nature is self-sustaining and can also function very well by itself), quietness (to reflect on and fully immerse yourself in your surroundings), patience (if you are after observing interesting wildlife) and responsibility (to understand that outdoor activities can also have negative consequences for sensitive species such as the large predators or the forest reindeer, especially here in eastern Finland). With those words in mind, I wish you all unforgettable memories and enjoyable moments in the North Karelian Biosphere Reserve, regardless of whether you like it by walking, cycling or paddling!